Pandu joins an exclusive list of people making bold claims, following in the footsteps of Alan “you’ll win nothing with kids” Hansen, Razorlight’s Johnny “I’m the best songwriter of my generation” Borrell and Dave “I’ll take Leeds United back to the Champions League” Hockaday (for context here, he was sacked after 70 days) in putting their necks on the line to prove they’re right about their beliefs.

But what gives Pandu such confidence to believe that BERT is a huge gamechanger in the content and search sphere?

The name of this latest algorithm isn’t an attempt to humanise the update or honour the Sesame Street character of “and Ernie” fame.

BERT, or to go by its Sunday name Bidirectional Encoder Representations from Transformers, uses technology to gain a better understanding of natural language processing (NLP). This means that Google will understand language more like a human, rather than a robot, and be able to interpret the different contexts and nuances of search queries.

For writers with invested interest in SEO, this is excellent news.

I’ve set out below a few of the BERT update’s main benefits for both content and search.

Context is king when it comes to getting the desired outcome of a search query. However, under previous algorithms, there was a disparity between the language used by searchers and the results delivered by Google due to the search engine’s lack of contextual understanding.

Prior to BERT, Google’s AI normally interpreted each word in a search individually whereas now it looks at the collective meaning and how each word relates to one another.

One aspect of this improvement is a better understanding of lexical ambiguity – i.e. words which mean more than one thing. In an example from WordNet, the word ‘bass’ can mean (including, but not limited to) the following:

So, you can catch a bass, be a bass and slap bass, as well as play a bass clarinet. You can kind of see why it was difficult for Google to grasp the context of words! 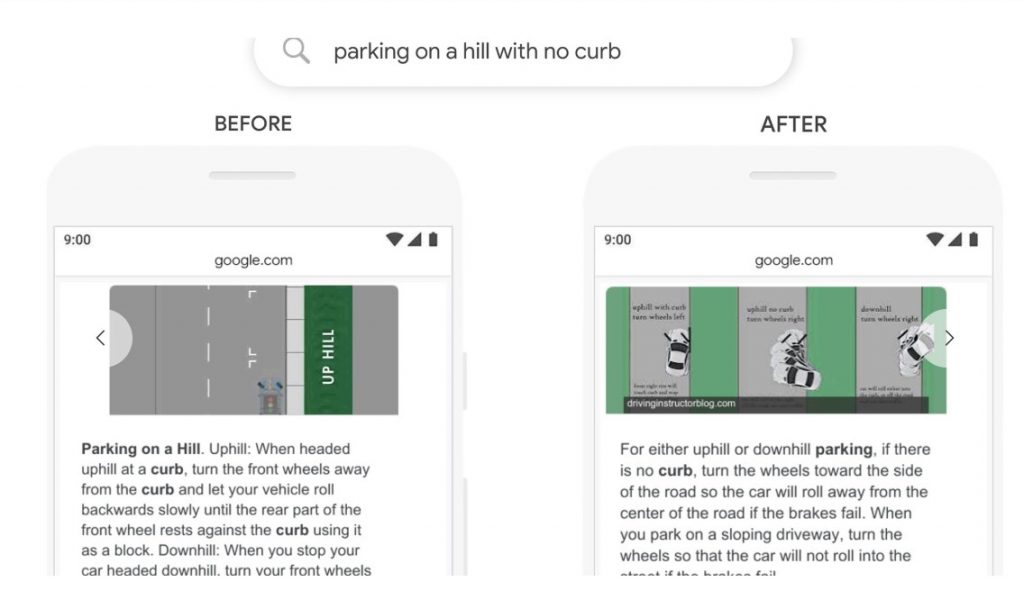 An example of looking at the whole query is “parking on a hill with no curb”. Previously, the algorithm would be confused by this query, and place emphasis on “curb” rather than “no”, as it wouldn’t understand that, in this context, “no” is imperative to the search query.

With the introduction of the Google BERT update, all aspects of the sentence are registered and understood, meaning the correct content is brought up.

A better understanding of prepositions

One for all the word nerds out there. The BERT update is teaching Google how to process and understand the use of prepositions in search queries. These may be a small part of the query, but the likes of “to” and “for” can alter the meaning of the sentence, creating nuances and misinterpretations in search results. As queries are usually peppered with prepositions, this aspect of the update is key.

I said earlier on that the name of BERT wasn’t to humanise the update – it’s functionality, processing power and understanding of how to “think” like a human in the new algorithm which gives it a person-like edge.

Google’s blog on the BERT update showcases a prime example of this, based around a Brazilian traveller wanting to go to the USA. 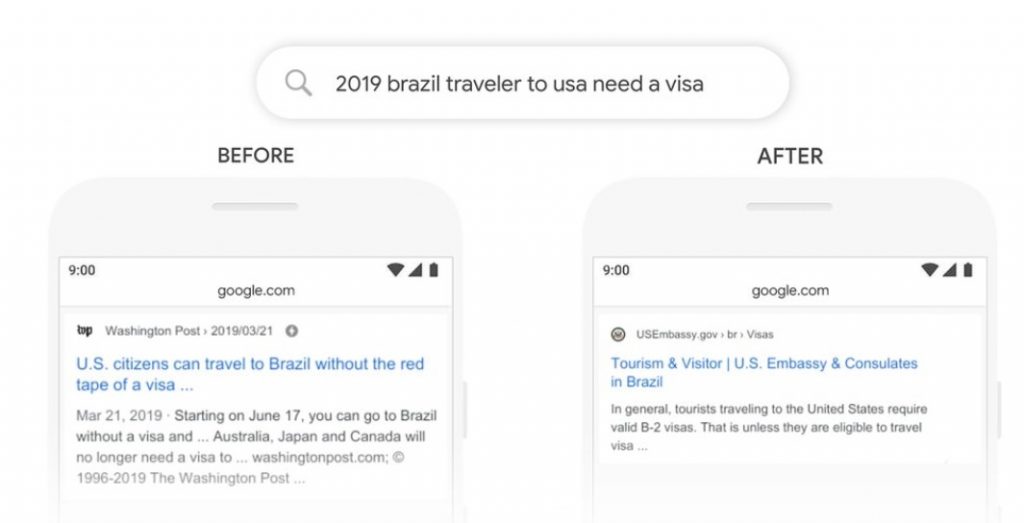 Pre-BERT, the prepositions weren’t understood by Google, putting the query as a US traveller looking to go to Brazil, rather than the other way around. However, with the introduction of the BERT update, Google can now process “to” and knows it’s a Brazilian traveller wanting to find out about a US travel visa.

BERT is on a one algorithm mission to rid this world of the “keyword-ese” – the spiel we use to make Google understand our queries. This is the unnatural, awkward language and phrasing users search when trying to get the answer we’re looking for, but the search engine wants to make sure users can entering queries as naturally as possible to achieve optimum results.

We’re all guilty of amending how we search in Google to get the right content in front of us, but BERT allows for a more natural way of creating queries. Take the term “do estheticians stand a lot at work” – certainly not my top search query of the year, but we’ll go with it. Before the BERT update, users may have chosen to search for “do estheticians stand on their feet a lot at work” to find the right content, which is a prime example of keyword-ese. 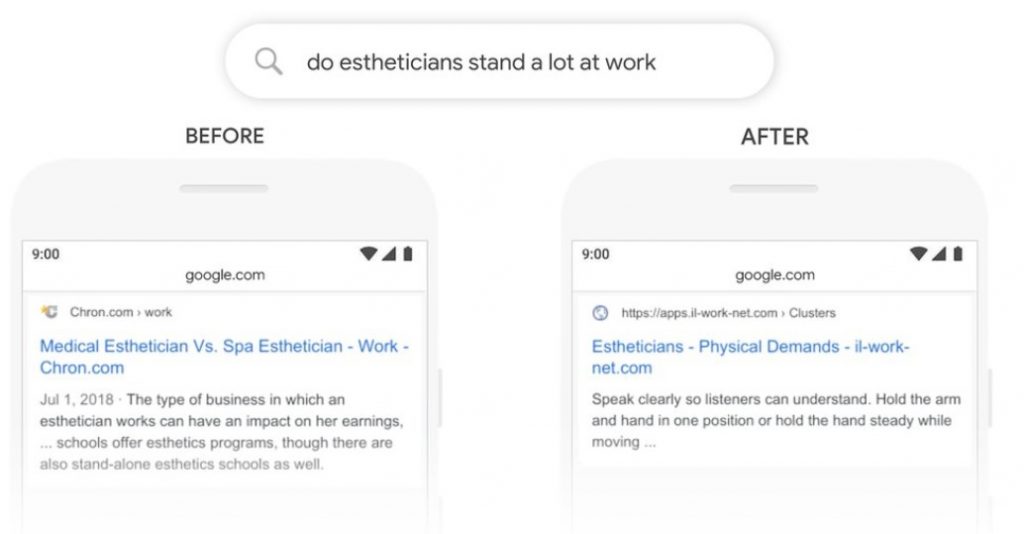 Under the new algorithm, it allows for a more conversational, natural query to be processed and understood – a huge benefit to the user.

Google does recognise, however, that issues with some searches will still arise and the context may be lost when using more natural language, so keyword-ese is certainly not dead in the water just yet.

BERT has been developed to make it easier for users to search Google more naturally, and receive more relevant results based on those searches, meaning its introduction is only a good thing for content marketing.

If you’re writing natural content which shows up in search, you’re writing content that matches what people are searching for, so this update will only help get your words in front of more people. It also will allow for the use of longer, more natural, conversational keywords and phrases to be in included, as Google will be able to understand them

In a Twitter Q&A, Google’s public search liaison, Danny Sullivan stated that BERT would not change the fundamentals of the search engine’s core beliefs on content: curate it for those who will be reading it. 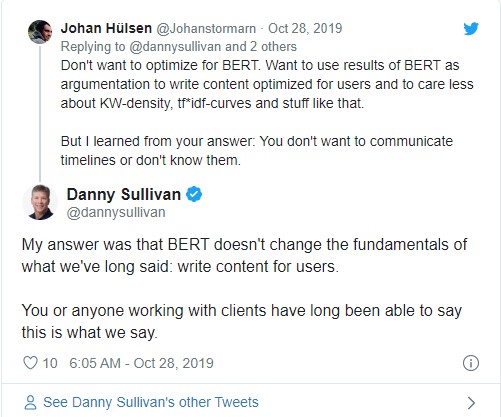 Of course, keywords still matter, they’ll always matter. But BERT means you don’t need to shoehorn in outrageous keywords that are as unnatural as Wayne Rooney’s head of hair to try and appease the Google Overlords.

Google’s BERT update wants you to write natural, user-friendly copy, with the reader, not the search in engine, in mind – this is a good thing for content.

Need help with your content strategy? Our team has a wealth of experience in devising and implementing content strategies across a wide range of sectors, delivering clients the success they’re after.

Get in touch with Josh today on 07432 655 440, or drop him an email on josh.westerman@brand8pr.com for more information.